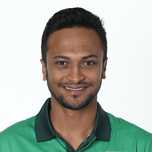 circles. Being a genuine all-rounder, Shakib is a vital cog in Bangladesh’s line-up. He has been a

consistent performer for his country, over the years. Shakib first came into notice when he played

cricket for several villages near his hometown of Magura. He spent time honing his skills at a

England and Sri Lanka. He scored a 86-ball century and picked up three wickets in the final to help

the team defeat Sri Lanka. This earned him selection for the series against Zimbabwe.

He cracked his first ODI ton against Canada in the tri-series played in the West Indies, just before

the 2007 World Cup. He scored a composed fifty and bowled 10 tight overs for 44 runs without a

wicket as Bangladesh secured a big win over India. His consistent performances enhanced his

reputation. He went on to score a century against Pakistan, later in the year.

In the Test arena, Shakib continued in the same vein as he had done in the ODIs. His major

breakthrough came in the Test against New Zealand in Chittagong in 2008. He picked up 7/36,

which till date is the best figures by a Bangladeshi bowler. Shakib also contributed with a fifty in the

second innings to set New Zealand a challenging 317. However, he got no support from the other

Shakib was ranked No. 1 among the all-rounders by the ICC thanks to his consistency. He took over

the captaincy from Mohammad Ashraful and led from the front. He picked up five wickets and went

on to score an unbeaten 96 in the second Test in Grenada against a depleted West Indies side.

Shakib’s stint with Worcestershire made him even better. He took 35 wickets in a single season,

Despite leading Bangladesh to wins against England, Ireland and Netherlands in the 2011 World

Cup, the team crashed out and many people blamed Shakib. He put aside all the criticism and

performed well for Kolkata in the 2011 IPL.

Shakib was sacked as captain before the tour of West Indies in 2011. However, he yet again proved

Indies. His bowling was backed up by 168 runs he scored in two Tests. He scored 79 from two

innings in the ODIs. Bangladesh lost both series. Later in the year, Shakib was Bangladesh’s top run

-scorer and wicket-taker in the home Test series against Pakistan in December 2011. In the second

Test of the series, he became Bangladesh’s first player to score a century and take five wickets in an

innings. After the series, he was ranked No. 1 in the ICC’s ranking of Test allrounders.

The Bangladesh Cricket Board launched Bangladesh Premier League in 2012, a Twenty20 tournament to be held in

February that year. The BCB made Shakib the ‘Icon Player’ for Khulna Royal Bengals. Under his captaincy, Shakib’s

team progressed to the semi-finals of the competition, where they were beaten by Dhaka Gladiators. In 10 matches,

he scored 280 runs and took 15 wickets, and he was his team’s leading wicket-taker and later he was named Man of

In the 2012 Asia Cup, Shakib scored 237 runs, including three fifties and also took six wickets. Bangladesh progressed to the final of the tournament for the first time, where they lost to Pakistan by two runs. Shakib’s performance earned him the Player of the Tournament award and he reclaimed the No.1 ODI allrounder spot from Australia’s Shane Watson. Later that year in the 2012 edition of the IPL, Shakib played in eight of Kolkata’s 18

matches and won two Man of the Match awards as the team won the IPL for the first time.

During the home series against West Indies in 2012, Shakib became the second Bangladeshi player to take 100 Test

wickets, making him the leading wicket-taker in Tests for Bangladesh. He also achieved the feat of becoming the

fastest allrounder to take 100 wickets and score 1,000 runs. He achieved the milestone in just 28 matches. However

, he was ruled out of the ODI and T20 series due to a shin injury.

In the 2013 BPL player auction, Shakib was snapped up for a whopping amount of USD 365,000 by Dhaka Gladiators, making him the most expensive player of the tournament. He led his team to victory, getting 329 runs and 15 wickets in 12 matches and emerging as the Man of the Tournament for a consecutive second time in the BPL. Shakib signed up for Leicestershire County Cricket Club as their second overseas player for T20 matches.

. He achieved this feat against Zimbabwe. He performed admirably in the ODI series that followed, as well.

leaving him free to participate in overseas tournaments.

Post the successful World Cup campaign in 2015, Bangladesh continued their good form in the 50-over format. The consistent Shakib played a huge factor in his team’s hat-trick of ODI series victories – against Pakistan, India and South Africa – all at home. Barring his unbeaten 50 against Pakistan, Shakib didn’t have a great WT20 held in India in 2016 and that didn’t help his team’s cause as they failed to register a single win the Super 10 stage. He terms the one-run defeat against India in Bengaluru and the 2012 Asia Cup final loss as two of his major cricket regrets he would like to erase.

After a decent outing in the one-off Test against India, Shakib had a superb tour of Sri Lanka. Shakib notched up his fifth Test ton in Bangladesh’s historic 100th Test match. That knock proved to be instrumental in Bangladesh winning the match and squaring the series 1-1. He was the Man of the Series for scoring 162 runs and taking 9 wickets.

After Mortaza announced his retirement from the 20-over format, the BCB appointed Shakib as the T20I skipper.